“Digging Up the Past”

Milligan’s second issue of his Stormwatch run takes a surprisingly slow turn. While we do get some interesting revelations about Stormwatch’s past, I wasn’t expecting a slow paced issue so soon in his run. Plus, as much as I liked Ignacio Calero’s art during Paul Jenkins’ short two-issue stint, I felt it wasn’t as strong in this issue. 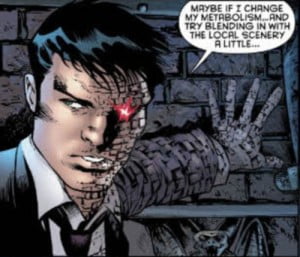 We actually get a double-dose of Milligan’s Stormwatch in the DCU this month. Besides this issue, Stormwatch appears in Red Lanterns #10 (also written by Milligan) and acts as a continuation of the events in Stormwatch #9. Between the two issues, I actually preferred the Red Lanterns issue. But since we got two Stormwatch helpings out of the deal, I didn’t mind the slower-paced regular issue as much.

The thing about the plot to the Stormwatch issue is that I felt it was just an excuse to explore some of Stormwatch’s past. Now normally I don’t mind this because of course I’d like to know more about their past, but the main story didn’t excite me enough to warrant the information. There is a lot of set-up in the issue as we get the return of Harry Tanner ( no spoilers, it’s in the solicits). He’s definitely my favorite out of the new characters introduced in Paul Cornell’s six-issue run so I’m glad to see he’s back and look forward to what he has planned for the team.

I will say, Apollo and Midnighter do get a nice moment at the end of the issue and plotpoints from both Cornell’s and Jenkins’ run are carried forward here. So that was nice because some of the other creative teams who have taken over books seem to have disgarded what’s happened so far. 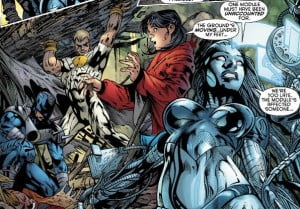 Also, I really enjoyed Ignacio Calero’s art in Jenkins’ run, but it was give and take here. It started off really strong but then seemed to lose something as the issue went on. Then I noticed that the issue had 5 inkers! Now some people may not think that makes a difference but it does. Inking styles vary just like artistic styles do and I think it threw the art off because like I said, there were some parts I liked but others just didn’t seem as good. I’m not sure if they brought so many inkers in because of deadlines, but I think it affected Calero’s art, which was a shame.

This is still my favorite of the Wildstorm titles but this was definitely one of the weakest issues so far. But I do like what I’m seeing set up here and Milligan’s already proven to me he can do a great story. I’d encourage you to read Stormwatch #9 from last month and Red Lanterns #10 to see what I mean. (all I got say about RL #10, Midnighter punches a cat!)