The second issue of Liefeld and Tieri starts off pretty weak but some interesting revelations at the end make for a much better comic. Even Clark’s art seems to be getting back to where it was before the current run started. It’s not a huge improvement but it is a step in the right direction. 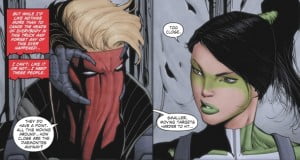 After last month I was kind of dreading where this issue would take us. The first half of the comic was more of a mixed bag than the last issue. We still get some cheesy dialogue but it is sprinkled with some great action scenes. I have to say it was so cool seeing Deathblow and Grifter fighting side by side again. But as much as I liked the action, as I neared the end of the comic, I feared that might be all we get and thus would end another issue of Grifter without much direction. Thankfully, I was wrong.

Grifter’s abilities take a dramatic turn in the issue and it’s an idea I actually thought should’ve been covered with the Grifter in the old WSU. It’s hard to talk about without spoiling anything but let me say this. If you remember Grifter’s battle with Green Arrow in Grifter #4, you may remember the incident where he caught one of the arrows that was shot at him. At the time, even he mused that it would be a long time before he learned how he could do that. Other than this moment, Grifter having any abilities beyond being good with a gun had not been explored yet. I have to say I’m happy with this turn of events and I hope it signals positive change for the title. 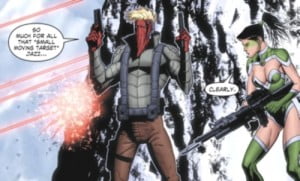 Even Scott Clark’s art seemed to be returning to its normal awesome style. There were some weird choices in some of the shots with the line work but overall it looked better. Even the Daemonite Elite Class looked better than last issue. And I love the way he draws Cheshire! As long as Clark is drawing beautiful women I’m still on board!

I am worried a little about the next issue because I’m not impressed by the design of the new villain they’re set to fight. But I’ll reserve judgment for that until next month. It’s still by no means perfect, but I’m not as exasperated with this title as I was last month. Above all else, I’m glad Grifter survived the cut of the 3rd wave of the New 52. I hope this creative team takes this opportunity to take some chances on the title and really garner some attention to it.