“Shadows of the Past” 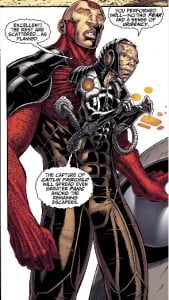 Ravagers continues to be one of more colorful offerings from the New 52’s second wave. It’s mix of old, new, and slightly-altered characters makes for something fresh and unique. That topped with gorgeous by Ian Churchill has quickly made it one of my favorite books to read these last two months.

One strength this title has had so far is Mackie is in no hurry to get this team together. In fact, one could argue that he’s doing his best to tear this team apart before it has even begun. After what these kids have been through, they are not eager to follow Fairchild’s lead. It’s funny how this version of Fairchild is in a role-reversal. You see, in the WSU Fairchild was part of Gen13: a group of teens on the run from an evil organization and their mentor was John Lynch (soon to be introduced in the DCU with the new Team 7 book this Fall!) Gen 13 had to earn Lynch’s trust. Here in the New 52, Fairchild has assumed a role similar to Lynch in that she is helping this group of teens escape an evil organization and they don’t automatically trust her either. I’d love to know if Mackie did this juxtaposition on purpose or not because if not, it’s a huge coincidence!

After what the villain Harvest put these kids through and Fairchild’s hand in the ordeal, it makes more sense that they would not simply choose to follow her right away. The situations they’ve been put in so far are forcing them to work together just to survive. This leads to some back-stabbing here in this issue. But the funny thing is, regardless of the betrayal, the group still worked it out. That made for some great story-telling here. 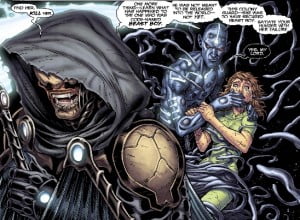 Also have to say I’m liking the villains that Churchill is churning out here. The main villain of the piece is Shadow Walker and he’s very creepy indeed. But check out the character called Keeper who looks like something out of the movie Total Recall. I was also surprised to see that two of the kids survived last issue after it appeared they had been killed. But the way they were taken down was still pretty brutal. It’s nice to have villains that are actually a threat. I don’t even mind that Warblade is currently being portrayed as a villain.

This series continues to be a pleasant surprise and is now one of the titles I really look forward to each month. This strange amalgamation of Gen 13, Teen Titans, and some new characters is mixing up rather nicely. It’s one of the most refreshing things to come out of the DCU New 52 and I hope it’s got a permanent place in the line-up.