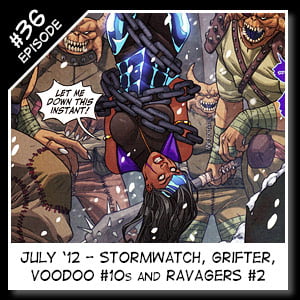 Show Notes:
Welcome to another episode of Wildstorm Addiction! Our resident Wildstorm experts Joe David Soliz & Benjamin Murphy review the new DCU versions of Stormwatch #10, Grifter #10, Ravagers #2 and Voodoo #10, as well as some other Wildstorm appearances in the new DCU 52.

00:00:34  – Joe welcomes everyone to episode #36 and gives his spoiler alerts warning. Remember, all written reviews on the website are spoiler free and usually get posted within a day of print release.

00:01:13  – Joe gives plenty of Wildstorm related news as it pertains to the current books in the DCU.

00:08:08 – Ben starts it off with the review of Stormwatch #10. Released released on 6/06, written by Peter Milligan with art by Ignacio Calero and cover by Miguel Sepulveda.

00:24:30 – Joe follows up on his thoughts for the tenth issue of Stormwatch, which were much like Ben’s on this one, just an okay issue for Stormwatch’s standard. Not too great and not terrible either. A setup for hopefully some great things to come.

00:27:09 – Joe reviews Grifter #10. Released on 6/13, written by Rob Liefeld and Frank Tieri, with art by Scott Clark and cover by Rob Liefeld. Two months in a row Joe doesn’t like where this title is going, especially as the dialogue that is being written for Grifter. However he does say that it is the better of the last two and it did have a readership increase of about 1,000 copies for the month which is a good sign.

00:39:40 – Ben reviews the second issue of the Ravagers. Released on 6/13, written by Howard Mackie with art and cover by Ian Churchill. With two new baddie characters introduced it’s hard for me to remember if I’ve seen them both after how many bad guys were in the Culling crossover.

00:47:20 – Joe gives his thoughts on the Ravagers and gives us some insight on the new mythos in the new 52 about the animals, the green, and the rot. Joe is loving this book and especially Ian Churchill’s artwork.

00:49:54 – Joe gives his review of Voodoo #10. Released on on 6/27, written by Josh Williamson with art by Sami Basri and cover by Paulo Siqueira. Joe didn’t dig this issue that much because he felt like it slowed down a bit thinking that Josh knew the title was ending.

00:57:39 – Ben gives his assessment on Voodoo #10, which he was along for the ride from the beginning of the issue despite its many, many problems. It just had a fun vibe to it realizing that this title is coming to a close.

00:59:06 – Ben gives an update on other Wildstorm related sighting and tie-ins from the other DCU 52 issue #10’s that have released last month.

01:01:21 – Joe continues by giving a run-down on the upcoming books and character appearances  in the new DCU relaunch. Remember, all these books are available digitally the same day as the print release at the DC section of www.comixology.com

01:02:06 – Ben gives a shout out to Chris Striker, of the TheAuthority.ws and Stormwatch.ws websites. Remember to visit The Higher Authority’s message boards Clark’s Bar to continue the Wildstorm integration discussions amongst long time Wildstorm fans at theauthority.ws. Be sure to check out our friends of the show, the Image Addiction podcast as they cover new releases from Image Comics and the Only the Valiant podcast as they cover the re-launching of Valiant Comics over the summer.