Much like a true grifter, Liefeld and Tieri have been holding this issue close to their vest. After a frustrating start to their run, they bring their first arc to a close in grand fashion. Despite all the previous complaints about their run they manage to bring it all together and give us a nice conclusion while still setting up more for future events. Finally, a Grifter issue that I really enjoyed! 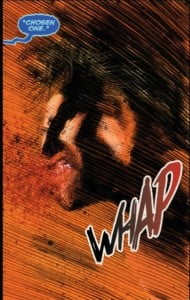 So, it’s no secret that I haven’t been enjoying these last few issues of Grifter. But I will say that they have gotten progressively better and this issue is by far the best since this creative team took over. Even knowing that this was the endgame, I’m not sure I still would’ve liked the previous issues. But this ended up being one of the most enjoyable issues of the entire series so far. I even liked the cover for this one because it seems Liefeld took more time with it. Speaking of art, Scott Clark is at the top of his game again and I can see how handing over last issues’ art duties helped him spend more time here.

I also thought Tieri’s dialogue was much better here. It all seemed to flow well and I liked the inner monologue Grifter had because it added more to the scenes and gave us insight into him that we wouldn’t have otherwise. On top of all this, we get a confrontation between Grifter and Helspont. In the Wildstorm universe, I don’t think these two ever had a one-on-one fight. But the Wildstorm Grifter probably couldn’t have taken Helspont on his own like DCU Grifter apparently can. I still wish there was some consequence for Grifter using his new powers but in order to hold his own against Helspont, I can see why they’d have to amp up his power.

Even Deathblow got a little redemption as a character here because he had been taken out pretty easily last issue. So it’s nice to see Deathblow can still be a bad-ass. I’m also surprised that so many of the supporting cast are surviving some of the events in these last few issues. It’s kind of nice to have characters that are not just created for the sake of cannon fodder. It also starts to build Helspont’s entourage which is something he had in the Wildstorm universe, even if they were different characters back then.

I hope this issue is an indication of things to come. If this is a sign that Liefeld and Tieri have gotten their grove with the title, then it was worth sifting through those early issues. I also like that the end of issue has ties to other DC books (won’t spoil which one) which continues to show the inter-connectedness of the New 52. For the first time in months, I look forward to the next issue of Grifter!