“You Can Never Go Home Again”

The regular series story arc comes to an end and it surprisingly leaves a lot of dangling plotlines. Even though the series ends after issue zero next month, it is interesting that there’s so many unresolved stories but thankfully they appear to have plans to continue them elsewhere.

Even though we still have the zero issue next month, for all intends and purposes this is the last issue of the series. The zero issues promises to tell Voodoo’s origin instead of moving the series forward. However, it will be interesting to see if it ties at all with the events we saw in this issue.

There was a certain resolution to this story that I think most people were expecting. The end of the story doesn’t come to pass exactly like most thought. This is good and bad in my opinion. When Williamson introduced the clone aspect of the story it was definitely a shocker. But as the series went on, the issue of Voodoo and her clone kind of lost its wow factor. The resolution Williamson picked is definitely unexpected and does leave open a lot of possibilities but I was still a little disappointed this was the route they chose to go. 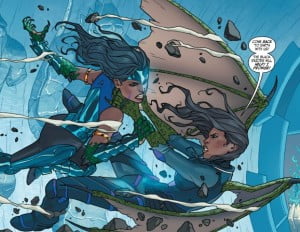 The issue ended up being a lot of set up for plotlines that we can only hope are carried over into other titles. The solicitations have already shown us that Voodoo shows up in Grifter #13 so it’s good to see they’re not just letting the character be shelved. Now, whether Rob Liefeld and Frank Tieri over in Grifter will carry some of these plotlines forward remains to be seen. The one consolation is that so far in the New 52 they have been really good at keeping the interconnectedness of the DCU so let’s hope that continues even when a book gets cancelled.

I’m glad we get at least one more month of artist Sami Basri. Other than seeing he’s doing a Supergirl issue in October after Voodoo is done, he is absent for any of the solicitations in November. I am also happy they finally gave him the cover of this issue! He’s gone twelve issues and never done one. There was the time period after John Tyler Christopher stopped doing covers that I think covers by Basri would’ve been a much better choice than what we got.

Overall, the series seemed to coast to its conclusion here. I am curious to see what revelations we get in the zero issue next month but for now, I think the series is pretty much done. It’s sad that we’re losing this title but I’m glad we’ll be seeing Voodoo over in Grifter afterwards.