DC’s Zero Month kicks off strong with a revealing and surprise-guest filled issue. The team’s deep roots in the DCU New 52 are laid out and they answer a few questions while posing some interesting new ones. They’re really pushing Stormwatch as the hidden dimension of the DCU and so far I think they’re doing a great job! 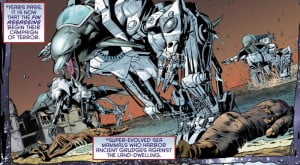 The issue focuses mainly on Jenny Quantum, the DCU’s current Century Baby. A surprise visitor shows up and shares with her the history of the Century Babies and their importance to the world. It’s no secret that even when Paul Cornell was writing this title, he let it be known that this title had ties to his current writing assignment, Demon Knights. The connection is finally explained here and I thought it was great! The old Wildstorm concepts continue to merge in very interesting ways with the DCU. There is also a cameo by an old Wildstorm favorite that fans of The Authority will love!

Not only do we get some great connections to DC’s past, we also learn more about what Stormwatch wants concerning the superheroes. It is a conflict that I predict will have Stormwatch confront the Justice League and the other DC heroes sometime in the future. It will be an epic conflict when it does happen. 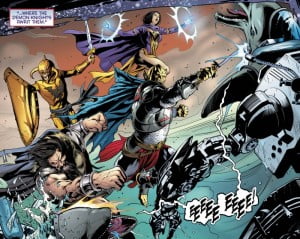 Finally, I must mention that I’m really liking Will Conrad as artist on this title. He reminds me of a more refined Miguel Sepulveda (who did the early issues of the series). They both seem to have similar line work but I think Conrad’s is cleaner. I also think he does a more accurate representation of the characters. Between Ignacio Calero and Will Conrad, I’m glad they’re keeping good artists on this book.

The first outing for Zero Month for me was a hit! The issue delivered as promised. It showed us the hidden history of Stormwatch, it showed their connection to Demon Knights, and threw in more Wildstorm concepts just for good measure. I hope there is a round of fans who are picking up all the zero issues as a good jumping on point. If nothing else, I hope the story will intrigue them enough to want to back track and find out more.