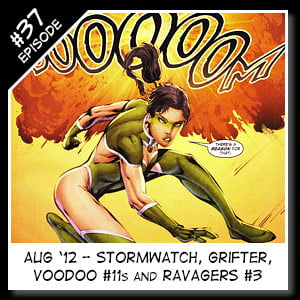 Show Notes:
Welcome to another episode of Wildstorm Addiction! Our resident Wildstorm experts Joe David Soliz & Benjamin Murphy review the new DCU versions of Stormwatch #11, Grifter #11, Ravagers #3 and Voodoo #11, as well as some other Wildstorm appearances in the new DCU 52.

00:00:34  – Ben welcomes everyone to episode #37 and gives his spoiler alerts warning. Remember, all written reviews on the website are spoiler free and usually get posted within a day of print release.

00:01:12 – Ben gives only a little bit of Wildstorm related news as it pertains to the current books in the DCU.

00:05:50 – Joe starts it off with the review of Stormwatch #11. Released on 7/04, written by Peter Milligan with art by Eduardo Pansica and Ignacio Calero with a cover by Scott Clark,  Dave Beaty, and Pete Pantazis. Also four inkers on this issue! Joe comes up with some great anime references that remind him of some of the scenes that happen in this issue.

00:20:20 – Ben follows up on his thoughts for the eleventh issue of Stormwatch….it’s no Grifter, and that’s a good thing, a very good thing!

00:22:44 – Ben reviews Grifter #11. Released on 7/11, written by Rob Liefeld and Frank Tieri, with art by Marat Mychaels, inks by Rob Hunter with cover by Rob Liefeld. One word, childish.

00:30:27 – Joe gives his assessment on Grifter #11…not much to say really. He did like Marat Mychaels’ art at least. But how can Grifter continue to have these amazing powers without a penalty of some sort, even Superman has kryptonite.

00:36:16 – Joe reviews the third issue of the Ravagers. Released on 7/11, written by Howard Mackie with art and cover by Ian Churchill and Norm Rapmund. Joe really likes this book because it feels the most fresh of the bunch as far as the ideas that are being dealt with for each issue.

00:48:56 – Ben gives his thoughts on the Ravagers, which are pretty close to Joe’s feeling on this title as well. Being unfamiliar with the “color” concepts carried over from Animal Man and Swamp Thing has him intrigued enough to catch up on those title to better understand where it’s all coming from. He’s also glad that they’ve pivoted away from “the Culling” crossover story line and seem to have their own problems to deal with at the moment, survival and all.

01:04:23 – Joe gives his assessment on Voodoo #11, not before naming the power that Priscilla has by Dragonite-ing out. He’s bummed out that this title feels like it’s giving up at the end as it has clearly been better than Grifter. Even though it’s cancelled it doesn’t have to feel that way.

01:07:42 – Joe gives an update on other Wildstorm related sighting and tie-ins from the other DCU 52 issue #11’s that have released last month.

01:11:34 – Ben continues by giving a run-down on the upcoming books and character appearances  in the new DCU relaunch. Remember, all these books are available digitally the same day as the print release at the DC section of www.comixology.com

01:12:55 – Joe gives a shout out to Chris Striker, of the TheAuthority.ws and Stormwatch.ws websites. Remember to visit The Higher Authority’s message boards Clark’s Bar to continue the Wildstorm integration discussions amongst long time Wildstorm fans at theauthority.ws. Be sure to check out our friends of the show, the Image Addiction podcast as they cover new releases from Image Comics and the Only the Valiant podcast as they cover the re-launching of Valiant Comics over the summer. Joe’s voicemail got moved to Ep. 78 because of San Diego Comic Con. And finally, an old Image favorite Cyberforce is coming back in a unique way through Kickstarter. Go to www.kickstarter.com and type in Cyberforce or (http://www.kickstarter.com/projects/620244384/cyber-force-returns)

Contact info:
Joe: http://twitter.com/grifter78
Ben: Look up “yoyomaster146” at the Wildstorm Resource Wiki (http://wildstormresource.wetpaint.com) or on the Wildstorm Message Boards.
Wildstorm Addiction: http://twitter.com/wildstormaddict
Post your comments for each episode on the wildstormaddiction.com!
Email us at wildstormaddiction@gmail.com.
Facebook Fan Page: Wildstorm Addiction Podcast Fan Page
Google+ Page: wildstormaddiction
Our show is now on Stitcher! Listen to us on your iPhone, Android Phone, Kindle Fire and other devices with Stitcher. Stitcher is Smart Radio for Your phone or tablet. Find it in your app store or at stitcher.com The latest episode is always available for you- no syncing needed… and no memory or storage wasted! Stitcher SmartRadio- The Smarter Way to listen to radio