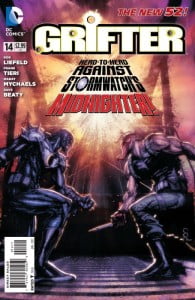 Hot on the tail of the news that the title is being cancelled, we get a fun, albeit shallow, issue of Grifter. While the issue was enjoyable it was a quick read and the logic behind the result of the fight between Midnighter and Grifter still has me scratching my head. At this point, all we can hope for is some entertaining issues before the end. 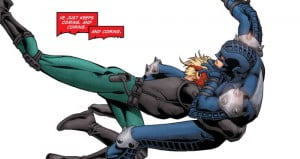 It’s always hard to write a review for a title you know is getting cancelled. You almost feel like it’s pointless because the purpose of a review is to encourage people to buy the issues so it won’t get cancelled. The only thing left at that point is to let others know if the end is worth reading or not. So far, I think it still is, even if I don’t agree with everything that’s being done with the character. 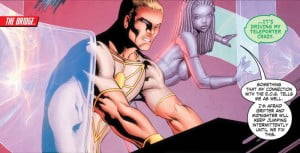 First, fans of both Midnighter and Grifter are going to be thrown off by the way their fight plays out. I know both characters are different from their Wildstorm versions, but even with the way they’ve been presented in the New 52 so far, it’s still hard to swallow. The issue is pretty much one big fight scene and leaves out something that’s been missing for a while in the series…character development. Since his New 52 debut, I’ve wanted to know more about this version of Grifter and with 14 issues in the can, I still don’t feel like I know much about him. I know it’s supposed to be an action book, but I can point to a dozen other comics that do a great job of mixing action with character moments.

I was also happier with Marat Mychaels art this issue. It’s got a simple style to it but I’ve always liked it. Come to think of it, I would’ve preferred him over on the Team 7 book; the book that will soon be the only place to get your Grifter fix. According to the solicits, he’s doing these last few issues of the book so at least we’ll get some consistency here. It’s also noteworthy that this is the last issue Rob Liefeld will get credit for. So it’ll be interesting to see what Frank Tieri does on his own with the last couple of issues.

While it is sad that the title will end soon, it’s probably for the best since it’s had so many missteps. Hopefully people will still be interested in Grifter over in Team 7 and eventually that’ll lead to a Wildcats title (here’s to hoping!)