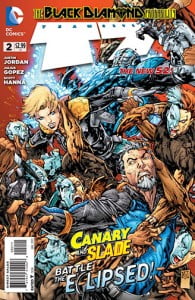 With all the introductions behind us, the team is finally able to get the story moving as we get some great action and some great character moments. You can tell writer Justin Jordan was having fun with this issue as we get a lot of story crammed in here. Guest artists Ron Frenz and Julius Gopez did a better job in my opinion with the art. Here’s to hoping that this is the beginning of a positive trend for this book!

This is a great example of a book that can have good action as well as a good story. Black Canary narrates the issue much like Lynch did in issue one but her commentary didn’t overpower the story. It was inserted in just the right spots so it would compliment what was going on at the time. We’ve got so many characters to keep up with, Jordan wisely gives the lesser known characters some screen time. For example, Bronson, or “Iron Man” as we jokingly refer to him, gets a rather comedic moment that ends up helping the team.

Jordan also does well to tie this back to a moment in issue zero which I never would’ve thought would be something we’d revisit. It’s good that he’s not just doing throw-away stories. The same can be said for some of the newer characters. It would be easy to dismiss them as cannon fodder since there are other more well-known characters on the team. But not only has Jodran said they are certainly not cannon-fodder, but he’s also proving it here by giving them moments to shine.

If I had any complaints about the issue, it’s kind of a weird one. For old Wildstorm fans, there’s mention of an old Wildstorm villain here, although unfortunately, it seems it was just a tease (hopefully for future stories). It’s almost as if Jordan had this villain ready and at the last minute they told him to use Eclipso instead (not a spoiler, he’s in the solicits). While a weird choice, it’s still cool that the idea that this Wildstorm villain exists has been established in the New 52.

This was the issue I wanted after zero but it’s ok that we had to get through all the re-introductions in issue one. If the stories continue like this, than the title should have a long shelf life. I’m still pushing for a better artist just because I think the book needs to have a stronger visual appeal. But for now, hopefully the story alone will keep people hooked.