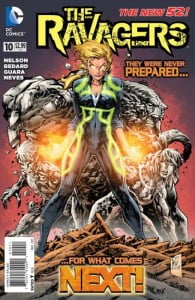 With the news of the title’s cancellation hanging over the issue like a gloomy storm cloud, the latest outing for the new creative team was not as strong as it had been in previous issues. There were some nice twists and turns in the issue but overall the disarray in DC’s editorial department seems to have caught up with this title. 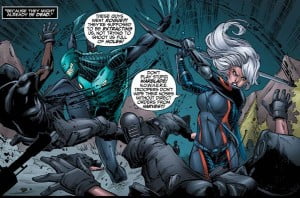 After praising writer Michael Alan Nelson for his inaugural two issues, a strange decision was apparently made with this issue. Nelson is only credited for the plot but Tony Bedard is credited for the dialogue. Now, I’ve seen this before in the Grifter title but there I understood it because Liefeld has his attention split between several titles and needed Frank Tieri to help with dialogue. But here, I’m at a loss why they’d split the writing duties. It may be that they had already informed Nelson about the title’s cancellation at this point and had him start working on his next assignment: Supergirl. But I guess we’ll find out next month if the writing duties are split again.

Now, Bedard’s dialogue wasn’t horrible, but I could tell a difference between his style and Nelson’s. There were also several strange story choices here. They had an interesting revelation for one character that I thought was kind of neat. But then we get the return of another character with a very clean, straight-forward explanation. It almost felt like DC told them, bring this character back as quickly as possible and don’t worry about the explanation. It was just a very weird moment that seemed to come out of left field. There are two characters who start a relationship that I thought was kind of cool as well. 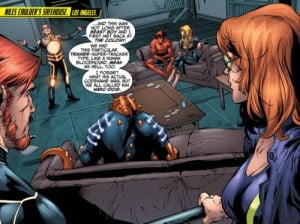 The artists are also split in the issue. Now Guara’s and Neves’ styles are not too drastically different so to have the two different artists wasn’t visually jarring. But I have to wonder are most modern artists just not able to keep monthly schedules anymore? The solicits do mention Deathstroke and he does appear some here. Deathstroke #18 was originally supposed to tie into this issue, but has since had its story (and cover) changed. More strange last minute changes by DC.

It’s a shame this title is on its way out but if you don’t give a title a chance to get its footing, what else do you expect? Hopefully these last few issues will be enjoyable at least. In the announcements of the cancellation it was mentioned that we’d find out more about Rose Wilson and Fairchild. I look forward to what that is and if it’ll lead to a new book.