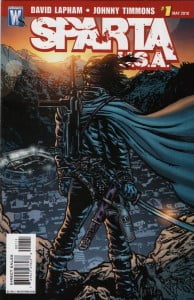 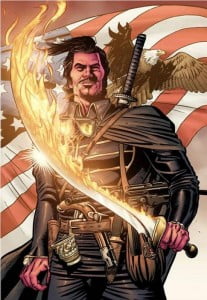 “Where We Are” (No Spoilers)

Wildstorm’s creator-owned releases have produced a few gems as of late which include but are not limited to titles like Mysterius the Unfathomable, North 40 and Victorian Undead. So here we have their most recent creator-owned offering with Sparta U.S.A. #1. Writer David Lapham is best known for his work on Young Liars and Stray Bullets. But honestly, this comic is the first time I’ve ever read any of his stuff. I’m not the first guy to try a new comic. I usually wait to see what others have to say about it. But at least with Wildstorm’s creator-owned stuff Im trying to change that.

Johnny Timmons’ art in this issue is good; in fact it’s really detailed. But there’s something about it that just doesn’t appeal to me. I think it is part of the reason it took me two weeks to finally decide to pick this up. He’s a good solid artist but there’s nothing here that just wows me. But that’s ok because the story is unique enough to keep me interested.

Lapham takes the “ideal”, almost stereo-typical all-American small town and turns it on its head. We quickly learn that Sparta is the quintessential perfect small American town, almost too perfect, in fact disturbingly perfect! This in particular spoke to me because I myself am from a small Texas town. So I can completely relate to the whole small town mentality where life is slow-paced and the local football team is revered above all else.

But then Lapham not only let’s us know that something is desperately wrong in Sparta, but also that something is very weird. First off, we’ve got two characters that have red and blue skin, the main character being one. Then we have the citizens of Sparta who are shown doing terrible things to each other for their own personal gain. And finally despite all the weirdness, things in Sparta are almost literally not what everyone perceives them to be.

At this point, I have no idea where this is going to go next and that’s a great feeling to have as a comic reader. While I was not blown away by the issue, Lapham has laid out enough odd cards on his table that I’m curious to see where this goes next.