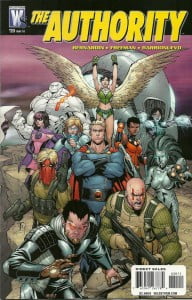 This issue can be summed up in three words: chaos, chaos, chaos! Last issue saw The Carrier on a collision course with the planet Daemon, the planet of the Wildcats sworn enemies the Daemonites. It was a great cliffhanger and set-up a precarious predicament for our heroes to say the least.

The creative team has got this run broken down into beats. We alternate from story to action on a pretty frequent little cycle. It is a really refreshing pace. One thing I was interested to see was how this creative team was going to deal with so many characters. Well, as I mentioned in my review for The Authority #19, they have wisely started with a smaller cast of characters before they begin adding to the roster. Despite the chaos that ensues, we’ve had enough room in our story to cover some establishing points.

First, Christine Trelane and Jack Hawksmoor are having a slight power struggle at the moment for leadership. Jack, of course, has been the leader before. Christine however, who comes from Stormwatch, has never led The Authority nor has she ever even been a member until now. It has been interesting to see how they are dealing with this issue since they have not had much free time to discuss it since The Carrier blasted off into space two issues ago.

Second, Grifter and Deathblow are The Carrier’s “police”. They are supposed to keep the populace of several thousand refugees under control. We have a great exchange between the two when they realize this huge responsibility they’ve been given. Freefall and Rainmaker, two displaced members of Gen 13, have been drafted into running the medical ward. Mind you these are two teenagers who are not doctors and have no where near the experience the other heroes on board have.

Finally, we have the mystery of what happened to The Engineer being touched upon. This little mystery takes a great turn in this issue. But it’s not the only mystery that’s answered. For those who read last issue, you may remember the “old man in the cloak” and the little boy named River. Both their identities are revealed and while my hunch about who the old man was ended up being right, I was very surprised to learn the truth behind River.

All in all, another great issue. We also get another great cliffhanger here which I can say this creative team has done masterfully well at crafting these so far. I’m definitely excited to see more.

(On a side note, we get a preview of Dv8: Gods and Monsters #1 in this issue which is set to come out in April. It’s by Brian Wood and Rebekah Issacs. I have to say I’m officially intrigued.)