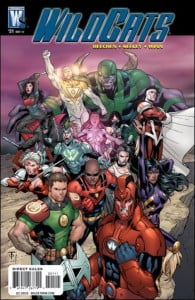 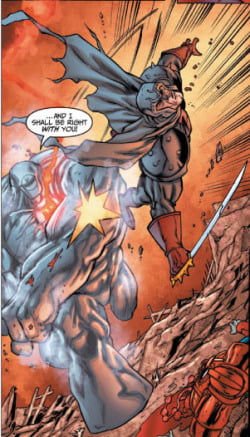 Wow! Wow! Wow! Wow! What an amazing finish to this crazy high-speed car chase on crack of a storyline that Adam Beechen and Tim Seeley have kicked off their run with! These guys took the phrase “hit the ground running” to the nth degree with this one. This was a crazy superhero war! This is the kind of carnage that would be wrought if super-powered beings really got into it.

When I saw that their first arc was only going to be 3-issues I was a little concerned because I thought that was too short for an arc. Especially considering the kind of the story they were going to tell. But I came to realize that it’s the very nature of this conflict that fast-forwarded it which in turn led to a shorter story. There is no shortage of action in this run, that’s for sure. People have mentioned the tremendous amount of characters that were packed in these last few issues. Some have enjoyed it immensely (like myself) but some who jumped on for the first time have mentioned they were lost or confused. I can see that happening as a new reader. But again, I think it’s the nature of this story that didn’t allow for character moments (other than a few small ones) because this conflict took place in 3 different parts of the world simultaneously and the heroes themselves didn’t have a chance to catch their breathe so it’s only natural the reader wouldn’t either. My hope is that the new readers were resilient enough to forgive the shortened character time and enjoy a good-old fashioned super-powered battle.

Now, Beechen was good to drop in stories elements that pave the way for new mysteries to unfold in future issues like the issues with The Doctor and Majestic. And I must say, in a short period of time, Sebastian has literally battled his way into proving himself one of the craziest and most powerful villains in not just the Wildstorm Universe, but I think across all universes. He is like a perpetual-motion machine of destruction that is near unstoppable. He is truly the anti-thesis of Majestic.

Some might argue that the ending was predictable, but I disagree. I thought Beechen kept enough surprises in it to keep it fresh and lead us to an incredible conclusion that is worthy of some of the most famous summer movie-blockbusters. Thank you guys for making the Wildstorm Universe exciting again! I can’t wait to see what you’ve got up your sleeves next.