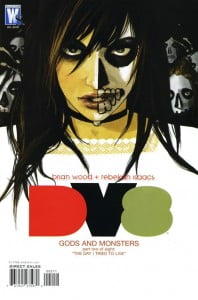 This issue was a little more reserved but I really didn’t mind due to the strong delivery of last issue. In the last issue, Brian Wood and Rebekah Isaacs accomplished the incredible task of getting the story set-up, establishing a great conflict and re-introducing the characters. Here we take time to focus on the character of Bliss. I really like the structure of the story because it seems that Wood is going to layout each character’s motivations before we get into any heavy action. In fact, this issue is very light on the action (although Frostbite does get to show off his powers in a ‘cool’ way -pun intended).

One of the ways that Wood is spot-on with the characterization is showing that Bliss is selfish. She doesn’t care about anyone or anything else if it doesn’t somehow serve her needs. The funny things is that ultimately, even though she does some uncharacteristic things early on (see the ‘birth’ scene), in the end her final goal still serves her desires and nothing else. This is the character of Bliss as she should be and I love that Brian Wood gets her character.

The only Dv8 character here I’m not familiar with is Freestyle. She debuted later in the original Dv8 run when I wasn’t following anymore. I’m glad Rebekah Isaacs gave her a new look. Honestly, from looking back at old pictures she always looked like a Sublime rip-off to me. Here, I think she’s got a more distinct look. Regardless of how she was portrayed in the old series, I love how she’s presented here as brainy and even a little goofy.

Rebekah Isaacs is still on her A-game with the art. I didn’t think she could do a cooler version of Bliss with her tribe than she did in issue one but she proved me wrong with an amazing two-page spread. I can’t wait to see Bliss and her tribe in action. 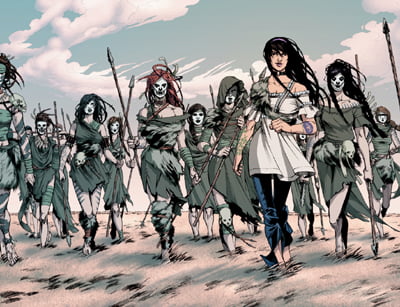 The issue was not as exciting as the previous but it moved the story along which seems was its purpose. Wood is obviously taking us through a certain series of events that must play out before we get to some all out action. It’s a build-up that I’m willing to wait patiently for to see the pay off.