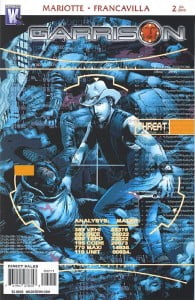 When I reviewed Garrison #1, I didn’t have much to say about it which is why it got a “Quick-Fix” review here at the site. It was a decent issue but based on what was presented I couldn’t find anything I wanted to elaborate on. Issue two is a totally different story though.

In issue one it’s basically established that everyone in the U.S. is under heavy surveillance. Everything people do is caught on camera and used against them if necessary. Along comes Garrison and he seems to be able to operate “in-between” all the surveillance enough to cause some chaos for the local authorities. The authorities have labeled him a serial killer but it’s obvious this is not what he is.

Without giving too much away, one thing that this issue makes apparent is Garrison is not your normal human being. He’s able to fight extremely well and even perform some tasks that a normal person could not. This is an interesting turn for the character because now I want to know why he can do these things. 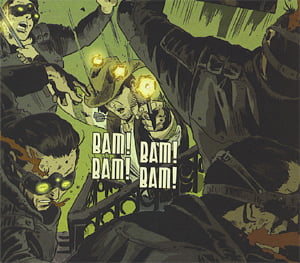 Another thing that I thought made this issue stronger was the amount of action in it. We two great actions scenes: one at the beginning and one at the end. Francavilla illustrates some means moves that Garrison pulls on some unfortunate officers. Watch for what he does with the beer tap at the bar and also what he does to the guy in the ball cap and glasses to see what I’m talking about.

We also get a little more info regarding Garrison’s mysterious origins. Apparently, he’s a little fuzzy on his origins as well. It’s a good mystery that really takes an interesting turn with the cliffhanger to the issue.

I’m going to hold back on upping my rating from issue one only because I get the sense we’re going somewhere very cool next issue. But it is a strong 7. I’d go 7.5 if I could. I’m really curious to see what happens next.