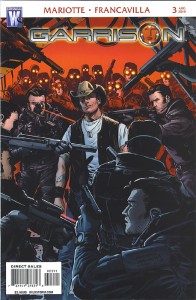 Garrison is undoubtedly Wildstorm’s summer blockbuster. I can’t say I’m blow away by the story by any means but Francavilla’s art and visual storytelling are keeping this comic more fun for me.

This comic is really banking on the mystery surrounding the title character. But fortunately, we do get some answers to his origins even though it’s only partial. Without Francavilla’s art, I’m not sure if I’d be enjoying this comic as much. He draws some incredible action scenes! One thing I really appreciate about his action is that the fights aren’t cookie-cutter. So far, every fight Francavilla has illustrated is unique from the last. It’s as if he was the fight choreographer in a movie and he was doing his best to keep each fight interesting. So far, I think he’s succeeded. 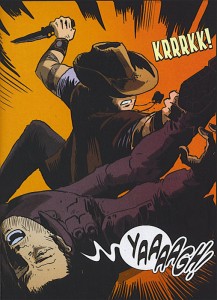 The story is somewhat interesting but like I said, it’s really banking a lot on the mystery of his origin. The part of his origin we do get is not something we haven’t seen in other stories before. So at this point, I’m hoping what’s left of his origin is more interesting. Although I will say the cliffhanger from last issue which led into the first fight in this issue is still very interesting. It’s just a shame it wasn’t really answered here.

There’s one part towards the end where there’s an incident in an alley that I felt was a little contrived. That plus the fact that there is suddenly some weird technology introduced that seemed out of place based on what else we’ve been shown in this world so far.

Garrison so far is following the path of a summer popcorn flick. There’s not much I have to figure out with this story. I just get to sit back and enjoy all the action. For now, that’s ok.