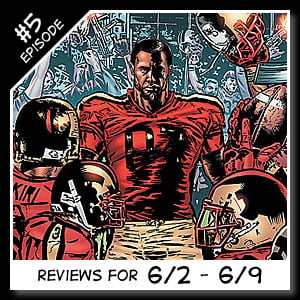 Show Notes:
Welcome to another episode of Wildstorm Addiction! Our resident Wildstorm experts Joe David Soliz & Benjamin Murphy talk about the Wildstorm comic releases for the weeks of 6/2 through 6/9.
00:00:34 – Ben welcomes everyone to Episode #5 w/reviews of Sparta #4, Gen 13 #36,  and The Authority #23.
00:00:57 – Joe gives the sad news about the breakup of the Comic Addiction Network website.

00:07:40 – Ben mentions that Wildstorm Addiction fans will have to subscribe to a new feed, hopefully you are using it right now!
00:08:11 – Joe gives the spoiler alert reminder and explains that any written review on www.wildstormaddiction.com is spoiler free unless clearly marked as having spoilers.
00:08:42 – Joe give the Wildstorm news: