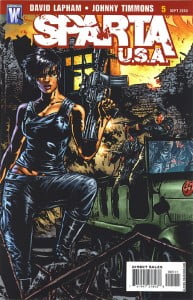 If this series had started out the way this issue did, I might be enjoying it more. In fact, I feel like I’m reading a completely different comic now.

The one thing that’s frustrated me the whole way through this series is that Lapham has spent so much time setting up mysteries, he’s waited too long for the pay-offs. Even knowing he only had 6 issues to tell the story, he kept the mystery of Sparta going for more than half the mini-series. We don’t have all our answers in this issue, but it was definitely a much more exciting issue than any of the previous.

Nazi’s are like the ultimate bad guy. Even though they originated in Germany, they did not represent the German people. It is this autonomy that makes them such perfect bad guys. In fact, I’d assume that when Lapham pitched this story to Wildstorm he mentioned that Nazi’s were the bad guys of the story. But why did it have to take 4 issues for them to show up? I don’t know if they’ll be enough to save this mini-series when all is said and done.

The revelation of Maestro’s true identity was interesting but seemed to come out of left field. The theme of this comic seems to come from the famous Battle of Thermopylae (which of course, is the inspiration for the movie 300). Speaking of which, the references to ancient Sparta really get heavy here. But those references make much more sense than the origin of the Maestro.

Well, just one more issue and we’ll see where this all ends.