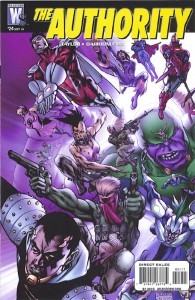 I’m glad this was labeled as a “Part 2” because you really have to read the previous issue to understand what’s going on here. I think the old “every issue could be someone’s first” thing can be fudged a little when you outright number the parts of your story.

The issue heralds the return of artist Al Barrionuevo who had been off the title for two issues. We originally thought he’d left with the previous writing team but it seems they just brought in artist Mike S. Miller for the past two issues to give Barrionuveo a chance to get some issues in the can (especially since the solicits for the next two issues list him as the artist). It is bittersweet because I love both Barrionuevo’s and Miller’s artwork. Their style is way too different to pick one over the other. But Barrionuevo returns in full force with some amazing work.

I like the idea of Mondregon but I was a little disappointed with the reveal. I just had a different idea of what the monster was going to look like and I shouldn’t have done that. It is a cool idea and the opening panel showing the size difference between it and The Carrier is a great shot. I do love that we get to see River in action a little. He’s an interesting new character and I look forward to learning more about him. 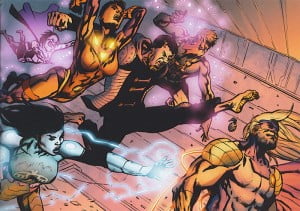 The battle between the heroes and the Aegean was pretty cool. I actually feared for some of character’s safety because of how powerful the Aegean is and I was right to be worried for at least one character. Taylor doesn’t forget to throw in a little bit of humor during all this action like he’s done in the past few issues. There are a couple of dialogue gags during the battle with the Aegean that were pretty funny.

I have to say I was a little disappointed with the reveal of the secret in Jack’s box. But there is a one small bit of the mystery left that may change my mind about it. I guess after so much build-up it was almost impossible to live up to the hype.

The end of the issue was pretty awesome and really unexpected. It closes an arc for one of the characters who we’ve followed for a while now. This run is more than halfway done and with certain storylines wrapped up and others opened, I’m anxious to see what else we’ve got coming before year’s end.