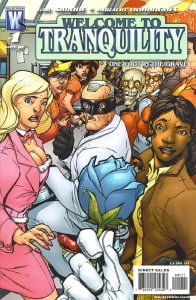 Welcome ‘back’ to Tranquility! That quirky little town in the Wildstorm Universe that Gail Simone introduced us to back in 2006. In case you don’t know, the original Welcome to Tranquility ran for 12 issues. As part of the Worldstorm event, it retroactively added this cast of elderly superheroes to the Wildstorm Universe. For example, it added a history between Majestic, The High, and Tranquility resident Maximum Man as a trio fighting crime in the early 20th century called The Big Three. It was an idea that did not exist before the series. After the series, there was a Welcome to Tranquility: Armageddon one-shot that appeared as part of the Wildstorm: Armageddon crossover. Since then, we haven’t seen the town other than a few mentions of it over in Gen 13. 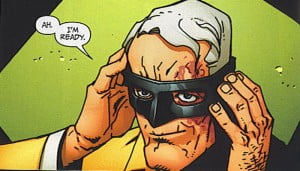 First thing you need to know is this happens before World’s End so it has no bearing on that story. The second thing I’m sure you want to know is, “Can I read this without reading the first series?”. Well, kind of. This is truly a sequel to the original series. It follows on the heels of the original arc which centered around the story of Mayor Alex Fury. But there is at least one reference to the second arc of the original series. Simone does a good job of getting us up to speed on the events of previous series. So, I can honestly say you won’t be lost reading this, but you will have the feeling that there was a whole other story that happened that you missed out on. Thankfully, the original series is collected in trade and it’s not a big deal to catch up with it. 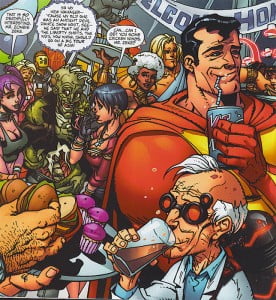 The original series had Neil Googe doing the art. This time he’s only providing the covers. We have Horacio Domingues on art. I’ve seen his work elsewhere and I have to say it’s just ok. It’s similar enough to Googe’s that if you were reading, it wouldn’t be too jarring of a visual change, but I don’t think Domingues puts as much detail in his art like Googe does. An example of this is a scene of a car exploding that in my opinion looked really weak. Don’t get me wrong, his art is not terrible at all. It fits the series perfectly. I just thought it could have been stronger.

One of the things that I loved about the original that’s still intact here is Simone’s humor. We start off with a couple of great gags at the beginning including a very clever one that gives us a summary about what happened in Tranquility’s first arc. Plus all the dialogue is spot on. Every character’s personality shows through in not just what they say but also how they say it. These are all Simone’s creations so I’m glad she’s the one writing this book.

This was a good first issue that sets up a great new mystery for the citizens of Tranquility. We got to see the majority of the residents here but there’s still a few more I hope to see by the end of the mini-series. I’m glad Simone decided to come back to this sandbox and play.