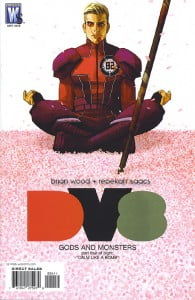 Okay, now we’re back on track with this issue! The series had slowed down a little bit, especially last issue, but now we’ve got an issue centered on Threshold. Did anyone really think we’d get a slow issue dealing with Threshold? I think not!

Since he first appeared in the original Gen 13 mini-series Threshold has always been a very interesting character to me. He’s psychotic but he’s well justified in being this way I think. He saw his parents murdered in front of him when he was just a kid. He was raised by Project Genesis to be a killer. And he had Ivana Baiul as a lover once upon a time, something I think would drive anyone crazy. He’s also a very angry character which means he could snap at any moment and believe me, snap he does.

One of the interesting themes of this issue is fear versus respect. Threshold is obviously someone who wants to be powerful and to be feared for it. But Brian Wood reminds us that there is such thing as respectful fear. Threshold is forced to look at himself and his methods in this issue and determine if his history of failure as a leader is because his focus has been in the wrong place. I love stories like this. It reminds me a lot of the lessons learned in Batman Begins. 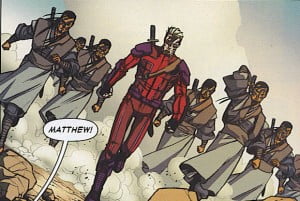 With Threshold being the focus of the issue, Rebekah Isaacs gets to draw some intense action scenes. And if you know Threshold, you know that his fights can get pretty gruesome sometimes. I’m happy to inform you, that trend continues here. We get to see both sides of Threshold’s fighting expertise: using his powers and fighting hand-to-hand.

By the end, we get some classic Threshold moments as his little journey comes full circle. It’s a tragic event but it is completely in character with Threshold. I’m just curious to see what the repercussions of his actions will have concerning another Dv8 member who got caught up in the incident.

We’re half-way through this mini-series and it has been a solid read so far. Wood and Isaacs continue to give us an engaging story. Each month they prove why they were the perfect creative team for this book.