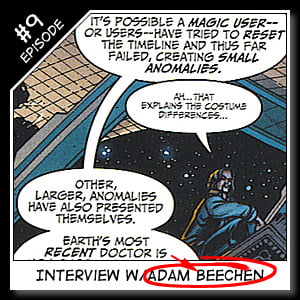 Show Notes:
Welcome to a special episode of Wildstorm Addiction! Our resident Wildstorm experts Joe David Soliz & Benjamin Murphy talk about the Wildcats on an exclusive interview with Adam Beechen to discuss both he and Tim Seeley’s monumental issue #25. Adam decided that with his supreme celebrity status that air conditioning was more important than sound quality. So even though I took a stab at reducing the background noise, in the end I decided to leave it as is. I apologize for this inconvenience, however, Adam doesn’t care about you and says he just wanted to get back to his Mai Tai’s. [Comment in jest by the editor, BEN]

Adam really elaborates on many of the questions asked with many insights into what has happened with the Wildstorm Universe over the past two years.
00:00:34 – Ben welcomes everyone to Episode #9 for the week of July 21st. He introduces Joe and own special guest for the evening, Adam Beechen, writer of the Wildcats: World’s End.
00:00:56 – Joe welcomes Adam and thanks him for being on our show.
00:04:37 – How did you get your start in the industry Adam?
00:06:39 – How did you get pulled into the Wildstorm Universe?
00:08:25 – You have a ton of characters to deal with in your Wildcats run. How do you keep track of them all?
00:12:10 – What are some of your influences as a writer, especially coming from an animation background.
00:13:35 – How proud are you guys to be breaking the issue #25 milestone with Wildcats?
00:20:09 – Can you explain the costume changes in the WSU? (Originally meant for Tim Seeley, unfortunately we couldn’t get him on the call at the time.)
00:23:30 – You were able to introduce some great new villains into the WSU with Sebastian and the Red Blade. Are there any classic villains you’d like to bring back?
00:28:20 – We haven’t seen too much change in any of the bigger core characters. However some of the Gen 13 characters(Grunge in Wildcats & Roxy in the Authority, as well as Fairchild in Gen 13) have really been stepping up and taking on more of an adult role, can you explain the decision to highlight these characters?
00:34:16 – After two years into World’s End there are still a lot of people on the fence about the Wildstorm Universe. What would you say to those people to win them over?
00:49:43 – Are there any characters or titles left that you’d like to write or do a solo book on?
00:51:40 – Fun Question! Everyone’s been dying to know(actually just me) who came up with the “cats” in the title pages of the current Wildcats run?
00:53:08 – Adam gives a shout out and an invitation for anyone attending the San Diego Comic Con this weekend. There is a Wildstorm panel Saturday July 24th from 6:30-7:30pm. After the panel Wildstorm will be having a sit-down at the Hyatt bar around 8:30 to chat. Meet Adam there!!