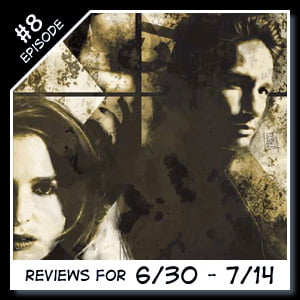 Show Notes:
Welcome to another episode of Wildstorm Addiction! Our resident Wildstorm experts Joe David Soliz & Benjamin Murphy talk about the Wildstorm comic releases for the weeks of 6/30 through 7/14.

00:03:49 – Ben reviews The Authority #24 “Mondregon Part 2” written by Tom Taylor, art and cover by Al Barrionuevo.
00:20:06 – Joe pimps Sparta #5 written by David Lapham and art by Johnny Timmons.
00:33:09 – Ben is fired up about the new licensed title The X Files /30 Days of Night crossover written by Steve Niles and Adam Jones, art by Tom Mandrake, with a cover by Andrea Sorrentino. Two variant covers, one by Sam Kieth and the other by Tom Mandrake and JD Mettler.
00:46:00 – Joe is pleasantly surprised by another issue of The Authority: The Lost Year reviewing issue #10 written by Keith Giffen and Grant Morrison, art by Brandon Badeaux, cover by Gene Ha. Hey Mikey, he likes it!
00:59:49 – Ben gives you the other Wildstorm titles that have released over the last three weeks that we didn’t review.