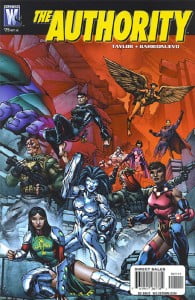 “This is Gonna Suck” (No Spoilers)

Don’t let the title of the issue fool you. It does everything BUT suck! But rest assured, Tom Taylor finds a clever way to present the title too. I personally thought it was hilarious how he did it. 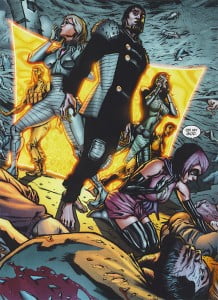 After the events of the last few issues I figured things would show down a bit here and I was partially right. Taylor does take the first half to the issue to fill us in on the mystery of Jack’s secret weapon. There is also time to get genuine reactions from the other team members concerning Jack’s weapon. Each of their reactions makes perfect sense and you’re either going to feel really sorry for Jack at the end or hate him for being such a jerk. I personally felt sorry for him.

I liked how even characters like Freefall and Rainmaker stood for what they believed in during this issue. Since they’re obviously the youngest of the team, it seems as if they’ve just been doing what they’re told. But of course that required some trust on their part that those in authority (no pun intended) were trustworthy. But after recent events, they have every right to question that and I loved that about them in this issue. 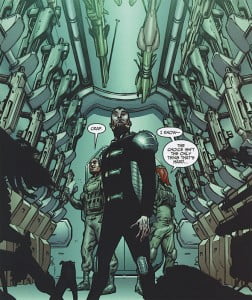 Taylor also continues to interject great science fiction into run, even mixed with a little science fact (well, hypothetical fact but certainly not straight up fiction). Barrionuevo gets to draw some incredible widescreen shots that have made for some breath-taking moments in this run. Just when I think Barrionuevo’s art is getting a little too dark for my tastes, he reminds me that he’s just setting the mood for the interior shots. Because when we see exterior shots of The Carrier and all the bright vibrant colors of the things they’re discovering, you’ll see the strength of Barrionuevo’s artwork in full force.

But the creative team’s not done with us yet. As the solicits reads “The Carrier appears to finally be approaching its ultimate destination”. Taylor not only gives us a cool little twist at the end but also leaves us with a great cliffhanger!

We’re rolling the down the second half of this creative team’s run. It’ll be a race to see who has the bigger finish in December, The Authority or Wildcats. Regardless, I can tell you it’s going to be one hell of a race!