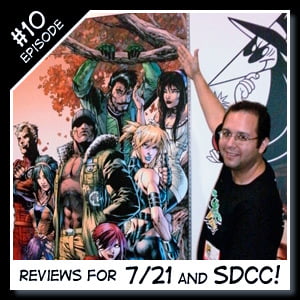 Show Notes:
Welcome to a special episode of Wildstorm Addiction! Joe David Soliz brings us the news from the San Diego Comic Con. We also have reviews of Dv8: God’s and Monster #4 and the new series, Welcome to Tranquility: One Foot in the Grave #1.

00:00:34 – Joe welcomes everyone to Episode #10 for the week of July 21st and the weekend of July 25th.
00:00:50 – Spoiler alerts warning, but all the written Wildstorm reviews at site are spoiler free unless otherwise noted.
00:01:00 -Shout out to Cosgrove at retrojunk.com who says: “These podcasts are amazing, man! They’re truly respected on this end. Thanks!”
00:01:37 – Joe gives the Wildstorm news: Wildstorm will have a ton of projects to coincide with the new movie “Red” based on Warren Ellis’ mini-series, premiering Oct. 15, Joe’s birthday. They will be releasing a Red:Prequel Special at the end of September, written by Cully Hamner, art and cover by Cully Hamner 48pp. $4.99. A new edition of the trade will be shipping in October; written by Warren Ellis, art and cover by Cully Hamner collecting the 3-issue miniseries under a new cover by Cully Hamner that also includes the script to issue #1 and never-before-seen developmental art by Hamner for $14.99. Each week in October a Red movie tie-in issue comes out. Red:Joe Special (Morgan Freeman) $3.99 and Red:Victoria Special (Helen Mirren) written by Jon Hoeber, art by David Hahn, cover by Cully Hamner. Red:Marvin Special (John Malcovich) written by Erich Hoeber, art by Diego Olmos, cover by Cully Hamner. And finally Red: Frank Special (Bruce Willis) written by Gregory Noveck, art by Jason Masters, with a cover by Cully Hamner.
00:04:43 -To coincide with the release of the Victorian Undead trade in October Wildstorm will be releasing a Victorian Undead Special written by Ian Edginton, art by Horacio Domingues, and a cover by Ethan Van Sciver.
00:05:10 -Also in October Wildstorm will be releasing End of Nations #1 written by Ricardo Sanchez, art by Yvel Guichet, and a cover by Chris Sprouse and Karl Story. This is a four issue mini-series based on the highly anticipated, massively multiplayer online real-time strategy game End of Nations from publisher Trion Worlds and developer Petroglyph! This is the same company that is developing The Telara Chronicles which also debuts from Wildstorm in September. The solicit reads, “Economic disaster brought world governments to their knees. Industrialized nations, for the first time, experienced hunger and poverty on a scale not seen outside the most stricken third-world countries. The Order of Nations, a new world power, stepped into the chaos and restored order, imposing a tyrannical rule. But they pushed too hard and people everywhere began to openly challenge them.  Follow the story of one resistance group as they struggle against the totalitarian regime of the Order of Nations in this 4-issue miniseries.”
00:06:32 – The new Wildstorm digital comic offerings courtesy of www.comixology.com, ranging from $0.99-$1.99 are: The entire Mirror’s Edge series #1-6 plus #0 FREE, Gen 13 #23 & #24, Stormwatch PHD #15 & #16, Supernatural: Origins #1-3, The Authority #3 & #4, The X-files #0 & #1, Wildcats #3 & #4, and Planetary #7.
00:07:37 – Joes brings a special SDCC report direct from the source, lucky guy! Be sure to check out the written post and follow along as Joe gives us his analysis of the event here: Wildstorm Addiction goes to San Diego! Also, download and listen to the audio from the actual Wildstorm panel from the 2010 comic con at the Official Wildstorm Podcast site.
00:26:03 – Unfortunately Ben is just finishing up getting over a cold and couldn’t stop coughing enough to get this review out, so Joe had to step up to the plate without any warning. Sorry about the all new all awesome Joe episode everyone! He reviews Welcome to Tranquility: One Foot in the Grave #1 written by Gail Simone, art by Horacio Domingues, and cover by Neil Googe, along with a variant cover by Ethan Van Sciver.
00:37:33 – Ben tries to spit out some thoughts on the re-introduction of Welcome to Tranquility.
00:42:16 – Joe reviews Dv8: Gods and Monsters #4 (of 8) written by Brian Wood, art by Rebekah Isaacs, and cover by Fiona Staples.
00:52:40 – Ben gives his thoughts on Dv8: Gods and Monsters #4.
00:54:13 – Ben works up the strength to give you the other Wildstorm Releases for the week of 7/21.

00:54:34 – Joe mentions one more thing about his trip to San Diego, just rub it in Joe! Actually Joe got to hang out with the guys who produce the Only the Valiant Podcast which is focused on Valiant Comics. You can check out episode #46 to hear Joe live from SDCC here onlythevaliant.com.