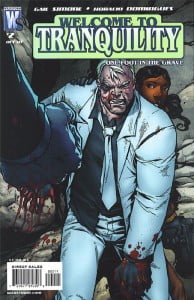 “Homecoming-Part Two: Of Cabbages and Kings” (No Spoilers)

Gail Simone does know how to write a fun comic. This little venture back into the town of Tranquility has her in top form as she crafts another great mystery while not skimping on the humor. 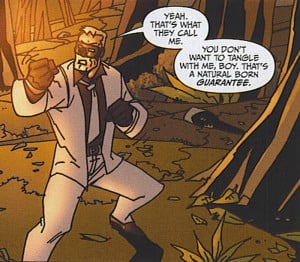 The opening pages are great! They offer more back story on the characters of Tranquility in fun and unique ways just like Simone did in the original series. But don’t think these little nuggets are just for fun. If you pay attention you can start putting together some of the mystery. This is especially true with the last page. I thought it was brilliant.

I will say a huge part of the mystery set up in the first issue is answered here (seemingly) and I’m kind of glad this revelation came early in this series. When you’ve only got 6 issues to work with, you don’t want to spend too much time on build up. Plus, we don’t just have one mystery to follow, we’ve actually got two as a once thought dead character has returned. 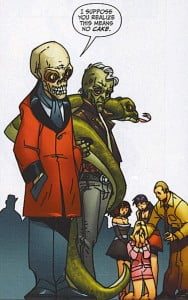 Horacio Domingues’ art does seem a lot stronger in this issue too. I don’t know what it was about issue one that made the art feel a little rushed and with not much detail. But here it seems he put a little more into it, especially during the humorous parts at the beginning and the end. Plus, Domingues does some inserts on the panel borders that really added to some key scenes. It’s not all fun and games though as we get a great action scene towards the end of the issue.

I still have neglected to re-read the original series but so far I can tell you Simone is adding enough information here to where I don’t feel lost. So if you’re still afraid to pick this up because you think you’ll be lost, think again. Simone is a great writer that doesn’t disappoint so you know coming into this you’re going to get a great story.