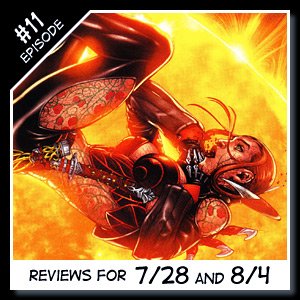 Show Notes:
Welcome to another review packed episode of Wildstorm Addiction! Joe David Soliz and Ben Murphy brings you Wildstorm reviews for the weeks of July 28th and August 4th 2010. Reviews including The Authority: The Lost Year #11, Garrison #4, Wildcats #25, The Authority #25, and Sparta USA #6.

00:00:34 – Ben welcomes everyone to Episode #11 for the weeks of July 28th and August 4th.
00:00:59 – Spoiler alerts warning, but all the written Wildstorm reviews at site are spoiler free unless otherwise noted.
00:01:10 – Ben gives a quick update on the wildstormaddiction.com website. The About page has been updated to include bios of Joe and Ben as well as an explanation of the ratings we give on all the books we review on the show. Along with a chart and average of our comic reviews, so check it out!
00:02:01 – Ben announces the soon to open Wildstorm Addiction Store! The store will feature many Wildstorm creator owned sets even before the trades hit the stands! Along with some various choice sets and signed issues. We will also be announcing details for some upcoming free give-a-way contests for the Wildstorm Addiction Podcast, so stay tuned!
00:02:58 – Joe reviews The Authority: The Lost Year #11 Written by Keith Giffen and Grant Morrison, interior art by Brandon Badeaux, and cover art by Gene Ha.
00:11:10 – Ben gives his take on Garrison #4 written by Jeff Mariotte, with art and cover by Francesco Francavilla.
00:18:19 – Joe reviews the epic Wildcats #25 written by Adam “I need my A.C.” Beechen, art by Tim “Why didn’t you call me?” Seeley and Andy Smith, along with a cover by Al Barrionuevo.
00:30:58 – Ben gives his thoughts on his current favorite WSU title, The Authority #25. Written by Tom Taylor, interiors by Al Barrionuevo, and cover by Howard Porter, Allen Martinez and Wes Hartman.
00:42:45 – Joe wraps up the weird, wacky, and always eclectic mini-series, Sparta U.S.A. Issue #6 is written by David Lapham, art and cover by Johnny Timmons.
00:51:31 – Ben give you both the print and digital Wildstorm Releases for the weeks of 7/28 through 8/4.

00:53:30 – Joe almost forgets to say goodbye to everyone, don’t worry everyone I set him straight!