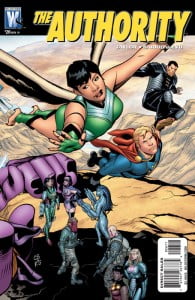 The Authority continues their space odyssey which turns into a space nightmare in this issue. Tom Taylor has taken us through some great science fiction during his run and he throws in a little science horror now. 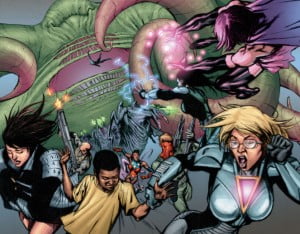 I can tell artist Al Barrionuevo had a lot of fun designing some of the alien creatures we see in this issue. I especially like the fact that none of them are humanoid. The team has traveled so far out in space now these things should not even know what a human is (or should they?). That’s another great thing about the story that’s unfolding here is Taylor keeps piling on the mysteries (including a very interesting one with Swift) even as we get some answers.

The comic really switches to the classic “widescreen” feel that made The Authority so popular when they first appeared. This works for and against them though in this issue. Don’t worry, it’s just a nitpick but I feel the issue went by way too fast. This is mainly because we’re getting huge widescreen shots which are highly appropriate with what’s happening here. But at the same time I feel cheated because I want to see more by this creative team. And when the creative team is cheating me of more of themselves, well I can’t help but complain a little. 🙂 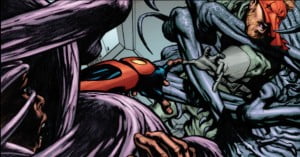 All in all, a great issue even if it was a quick one. Anyone who’s big into science fiction like me should be enjoying the heck out of this title. These are places I never thought I’d see The Authority go but I’m so glad they did (even if The Authority themselves are not).