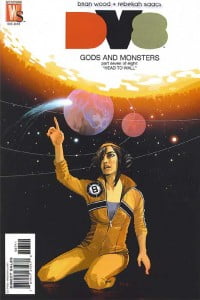 “Head to Wall” (No Spoilers)

Even though Dv8 is not part of World’s End, the end of the world theme seems to be prevalent here. Brian Wood and Rebekah Isaac’s take on Wildstorm group of deviants nears its conclusion as the situation escalates in this issue. 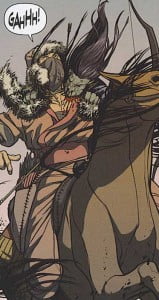 There was great build-up in this issue towards the battle that took place but ultimately I felt it was glazed over too quickly. After seeing the intense battle last issue, I just didn’t feel that this one was as epic as it should’ve been. I think part of it is because the story is starting to wrap-up and there’s still some story elements Wood obviously wants to cover so we didn’t spend much time on the battle.

Now don’t misunderstand, what little of the battle we got we really cool. Frostbite really got a chance to shine I thought during the fight. This was good to see because I felt (especially since he didn’t’ get a spotlight issue like the others) that he kind of fell into the background of the story after the early issues. There is also an awesome moment with Powerhaus that is beautifully illustrated by Rebekah Isaacs. 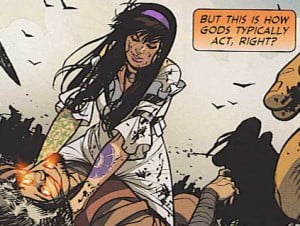 One aspect of the story I’m anxious to find out about is the role of The Carrier as it is apparently where Copycat has been re-telling this story since the beginning. There has been no sign of any members of The Authority expect for a voice on a loud-speaker that has yet to be identified. On top of that, there are is a great cliffhanger that leads us to believe one of the deviants did not survive the conflict. Based on clues in this issue, I already have in mind who it might be.

Just one issue left of this incredible series! You guys out there can trade-wait if you want but you’ve been missing a great ride. Plus I’ll know how it ends before all of you! So if you don’t want to get left behind, go out and catch up now before next month’s issue 8!