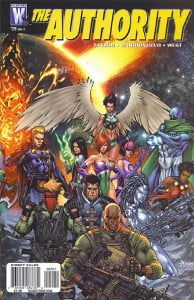 The end of the Wildstorm Universe is here and the first title to bow out in the imprint’s final month is one of its most popular and controversial titles: The Authority. My personal history with The Authority is bittersweet. I thought they were great when Warren Ellis first brought them on the scene but then I quickly lost my taste for them as they seemed to fall into a cycle of shock-value stories instead of stories that simply had some value. Then Dan Abnett & Andy Lanning (affectionately known to fans as DnA) came along with the World’s End storyline and made me like The Authority again. In the end it was a short reunion but I’m glad I could enjoy this team once again before the end. 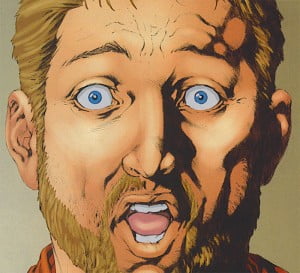 Writer Tom Taylor took the reins of this title earlier this year when the previous creative team left prematurely. Taylor quickly showed that he was going to have a lot of fun with this title. And have fun he did! Where DnA’s run was very somber and humbling for these heroes, Taylor took the lessons from DnA’s run and made sure The Authority did not forget them. I was worried that Taylor might not have gotten the news about Wildstorm’s closing until it was too late to change the end of his Authority run. But based on the way this issue was presented, it seems that he did. Taylor has the characters offer some great reflections on what it means to be a hero. This could have easily been something that could’ve turned out corny and preachy. But I think Taylor picked the perfect character to convey the message. It was a thoughtful commentary on the superhero genre in general and made excellent allusions to the end of Wildstorm itself. Even the title of the issue was highly appropriate and a brilliant callback to Ellis’ run where it all started. 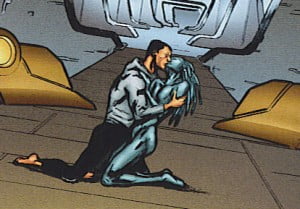 The run has also had two amazing artists in Al Barrionuevo, who took the majority of the issues, and Mike Miller who took two of the issues. On top of that, we get a third artist helping finish off this final issue with Kevin West. I don’t know where he came from but I really enjoyed the few pages he got. He definitely got to illustrate one of the best moments in the issue (see Flint and Grifter). We even got an impressive spilt cover by artist Jheremy Raapack. But Barrionuevo ended this issue in style as he got to illustrate some epic pieces as well. Plus he got to provide a great cliffhanger! That’s right, it’s the final issue and it had a cliffhanger! How will this get resolved since the title was cancelled you ask? Well, it seems that Taylor coordinated with writer Adam Beechen over in Wildcats to have this Authority issue lead directly into the final issue of Wildcats (#30). This was also highly appropriate because both runs at the beginning of the year began together before they split into their different stories. So it’s nice to see them come back together for the finale.

Well, that’s one Wildstorm title buried. But I have to say as a final issue I enjoyed it very much. I felt like it wound down and resolved Taylor’s story nicely and did well to let itself be lead into the final issue of Wildcats. Although December will be a month of goodbyes to the heroes of the Wildstorm Universe, I’m glad that we’ve got a great group of creators that gave it their all in these last issues. Thanks for a great run guys!