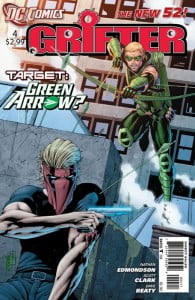 There’s been a lot of changes announced for the titles of the New DCU 52 but for this book we get a change in artist after just three issues with the launching creative team. Although I will miss CAFU’s art, it’s awesome that his replacement is Wildstorm veteran artist Scott Clark. I haven’t seen his art in ages and his style brings back good memories for me from the old Image Comics days. 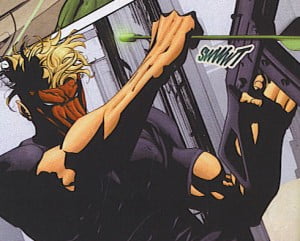 This was definitely the most action-packed issue of the series so far. From the moment Grifter shows up and begins his confrontation with Green Arrow, it is almost non-stop action until the end of the issue. When you have two characters crossover like this sometimes you have to let loose and give the fans what they want; one hell of a fight!

I’m not following Green Arrow’s title and my exposure to the character in the past has been limited to his appearances in Justice League. I know that as part of the New 52, Green Arrow is a younger incarnation. I think his youth is used very effectively and as much as I hate to admit it, he does give Grifter a run for his money. I’m trying to stay away from spoilers but let’s just say, as much as I wanted a different outcome to their fight, I kind of knew that is was inevitable the way it ended. 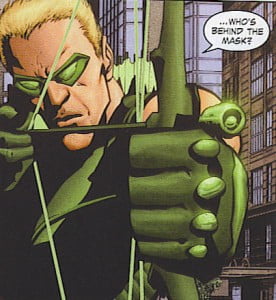 When I first saw that Green Arrow was going to be crossing over with Grifter I was a little leery but it ended up making for a great issue. Because of the way the issue ends, Green Arrow could potentially show up again, but they left it to where it could go either way. I definitely would not want Green Arrow to have Grifter become a nemesis of sorts but their battle did prove to me that their pairing was worth the time story wise.

Overall, an excellent issue that I didn’t mind was as fast-paced as what we’ve gotten so far. I look forward to this new team of Edmondson and Clark giving us a high-octane action title which is exactly what a Grifter comic should entail.