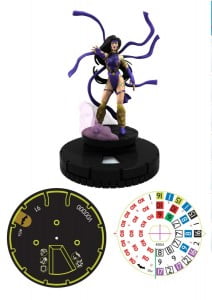 We go into Halloween week with yet another WildC.A.T.s figure from the upcoming Heroclix set.  This time it’s one of my favorites, the sexy Daemonite-detector herself, Voodoo!  She makes the 5th confirmed member of the WildC.A.T.s so far.  Her dial seems to reflect her powers well.  They also take into account her split Kherubim/Daemonite heritage which is pretty cool.  They even go as far as to reference her Coda training with Zealot.  I am so impressed by how much thought and research the designers have put into these figures so far.

As much as I’d like a Spartan, Void, or even a Lord Emp figure, I have to consider that there are only 54 figures in this set.  So, to have 5 out of the 54 already confirmed to be Wildstorm characters is way more than we could’ve asked for.  Check out more on Voodoo’s figure here and be sure to check out her stats below: 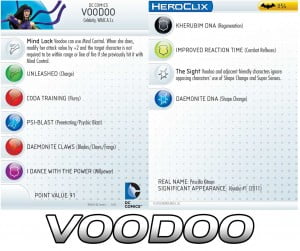