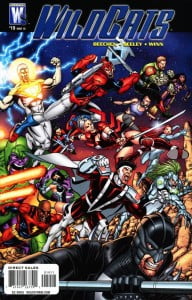 I have to say I was blown-away with this issue! Marc Bernardin & Al Barrionuevo did a great job introducing this situation in The Authority #18, but Adam Beechen & Tim Seeley have perfected it here. The story is fast-paced, the characterization is spot-on, and on top of that, it’s new-reader friendly!

First off, we get probably the best “Status Report” yet as the opening page catches us up on what’s been going on not only in Wildcats, but also The Authority and the recently cancelled Stormwatch PHD (#24 being the last issue). It is important to note that usually when a title is cancelled, their storylines are dropped. However, in the case of Stormwatch PHD, the final storylines are carried over into The Authority and Wildcats. This has been Wildstorm’s strength in the last 2 and half years since World’s End began. Wildstorm has crafted a tight cohesive universe and they’ve stuck to it. 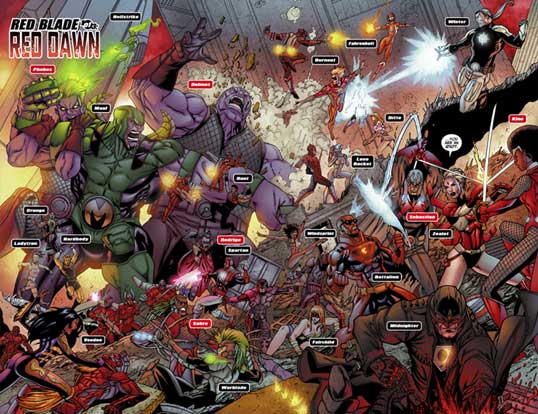 Now making your universe more connected is a double-edged sword because while it is great for existing fans, it can sometimes make it hard for new readers to jump on. But Beechen and Seeley do their best to make this issue new-reader friendly and I think they succeeded. Once the Status Report on page one is done we get a beautiful two-page splash page battle that follows. The great thing about this splash is not only do we get a great visual but every character is labeled with their name. With the amount of characters presented here it was such a simple yet brilliant idea. And I’m sure someone picking up this title for the first time would appreciate it as well. The creative team doesn’t stop there, we also get perfectly timed expository information from our characters as the battle continues. Whether after the main page, or mentioned in dialogue, you will know the name of every character in this issue by its end. 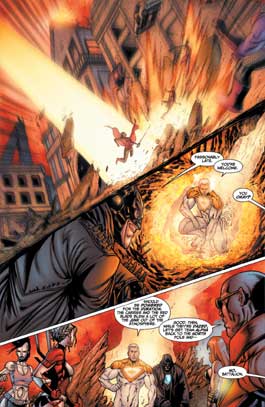 Beechen and Seeley have turned the Wildcats into a war comic. It’s obvious they remember the old “Cover Action Teams” subtitle Wildcats used to carry. They not only have remembered to keep the action but in this case we feel like we’re in the middle of a superhero war. There are three sides (yes, three) fighting each other and we even see how some of the human refugees get caught up in the conflict. Remember I mentioned that the characterization was spot-on? Well, it’s during this chaos that the personalities of the Wildstorm characters shine through. You’ve got some inexperienced heroes like Gen 13’s Grunge who don’t know exactly how to deal with all this. You’ve got seasoned veterans like Zealot heading into battle with years of battle experience behind her. And finally, you’ve got Spartan back, the real Spartan! This Spartan is the no-nonsense take charge leader from the Wildcats of old. It was great to see how precise he was in his tactics which makes sense since he’s an android who was built for this sort of thing.

Finally, we’ve got a great villain in Lord Sebastian, a Kheran Warlord who was introduced in the final issues of Stormwatch PHD. He is cut-throat, ruthless, and makes a great war adversary in this storyline. Wildstorm cycled through some of its classic villains in the first two years of World’s End. Mind you, this was not a bad thing but it’s good to see some new evil blood thrown into the mix.

All in all, an incredible first issue by this new creative team. I am really excited to see where the Wildstorm Universe as a whole is going now and I’m confident these new creative teams will continue to deliver.

Overall Rating 9 out of 10 (Excellent)