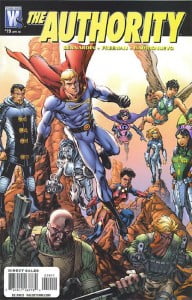 Marc Bernardin & Adam Freeman continue the adrenaline rush from last issue as this one opens up. But they soon slow things down enough to give the reader (and the characters) a chance to catch their breath. For now, The Authority consists of a smaller cast of characters than what we saw in the latest issue of Wildcats (#19). This allows for some really good characters moments in this issue. But fear not, because we do still get some action here.

One of the first great character interactions is Christine Trelane and Jack Hawksmoor. With Jenny Quantum gone for some time now, Jack has stepped up and taken leadership of The Authority. Christine on the other hand, was not recently leading Stormwatch. She was more of support staff for Jackson King. But with King stuck back on Earth, Christine takes it upon herself to step up and try to take charge of the situation. This of course is much to the displeasure of Jack.

Fans of Gen 13 will also note that Sarah Rainmaker is back and I like how her absence is addressed between her and Freefall but it’s not the focus of what’s going on. Overall, the heroes are trying to stabilize themselves as The Carrier stabilizes its voyage into space. I think Jack says it best when he tells them all, “Stormwatch. Wildcats. Gen 13. Not here. Look around you, people. You are the New Authority”.

The interplay between all of the characters is spot-on. When each character is assigned by Christine to do various tasks, she matches them up perfectly. I love the pairing of Grifter and Deathblow sent out to police the population. If you are reading them for the first time, I hope you get the sense that these guys have known each other for years based on how they interact. 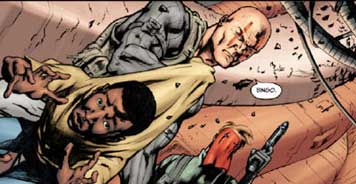 There are also several mysteries established here: one concerning a young boy named River that Grifter and Deathblow find, another deals with the room where the baby universe used to live and a very interesting one about Jack Hawksmoor. But the ultimate for me was the issue’s cliffhanger. I found myself saying “Oh ****” out loud when I saw it. It’ll only have relevance to longtime Wildstorm fans (or at the very least people who know the WSU) but it was a very unexpected and great turn of events. Any cliffhanger that makes me grieve that I’ve got to wait another month to find out what happens next is a great cliffhanger.

Finally I have to mention Al Barrionuevo’s art. I liked it in the previous issue but I do think he had some missteps with some of the characters. But here, I enjoyed every panel. I don’t know if he took his time here or if it was just the fact that he didn’t have to draw hundreds of characters like in the last issue, but it was definitely an improvement.

This new creative team has got two great issues in the can now and I hope people will continue follow them to see where they’ll take the story next.

Overall Rating 8 out of 10 (On Its Way to Greatness)