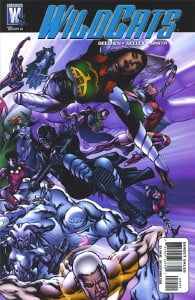 “The Protectorate 3 of 3: Knock Down, Drag Out” (No Spoilers)

Here it is! The battle of the century! Midnighter vs. Zealot! Did the fight deliver? I say, yes! 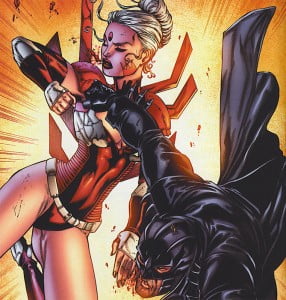 Adam Beechen relies on two of his many strengths during this issue. First, he uses a character that is normally in the background to narrate the events (similar to Runt narrating Gen 13 #34, which was also written by Beechen). This time it’s Petrified Girl, originally of the superhero team The Paladins (introduced in Number of the Beast). I had wondered what Beechen’s reasoning was in bringing Petrified Girl to Earth with Zealot, Cybernary, and Maul. It becomes clearer as she narrates the fight.

Second, he still is able to juggle several different stories within the 22 pages. He doesn’t use the entire issue to focus on the fight which is probably a good idea because it might have made it a pretty shallow issue. We get some time with the other characters currently active on missions like Battalion and Ladytron’s encounter with the new and mysterious character, Aeon. He also continues to tease us with some old Wildcats villains who have returned. And finally we catch up on Grunge and his current mission as well as a smaller arc for Warblade. There are also more cool cameos from other Wildstorms characters including a certain team fans have wanted to see in action again.

But don’t misunderstand me, just because the whole issue isn’t one long fight, we do not get cheated at all. The title of the issue, “Knock Down, Drag Out” says it all. On top of that, Midnighter and Zealot bring up some interesting arguments against each others’ beliefs as they fight. By the end, I think it’s resolved the only way it could’ve been resolved. Plus, it leaves at least one character’s future in question with an interesting new dilemma. 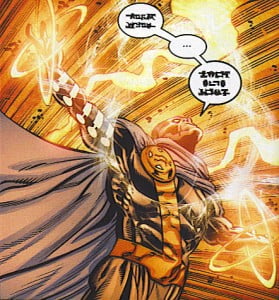 Tim Seeley’s art of course continues to be great but here he really gets to shine as he choreographs the fight and comes up with some great shots (pun intended). Plus, when you get to see Aeon in action it really is cool. I’m very interested to see what the real deal behind this character is. He drops some hints in this issue but not enough to put anything together yet.

Well, it’s been a long time since a Wildcats series reached issue 25 and it is in great hands with this current creative team. This is the mid-point for their run so now we start the road to December when their run ends and see what other exciting things they’ve got planned.