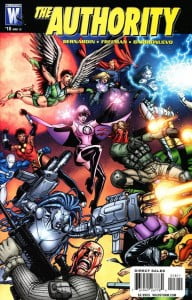 Wow! What a great way for the new creative team to come on board! The story was fast-paced and very engaging. Writers Adam Freeman and Marc Bernadin did a great job of conveying the urgency of the situation through their dialogue and the scenes they set-up. Artist Al Barrionuevo did a good job with his layouts and picking just the right moments to show.

Basically, a strange energy source from space is calling The Authority’s massive ship, The Carrier. Although they know nothing about the signal or its origin, the heroes split, with some deciding to board The Carrier to find out where it’s going while others stay behind to defend the planet. They could have easily drawn out this “who goes/who stays” process but Freeman and Bernadin wisely put, not only a time limit, but a pretty intense countdown as the heroes scramble to decide.

You almost don’t have time to breathe as you read this story but it’s a good feeling, almost like a rollercoaster ride. You feel you can’t relax until you get to the end. Once the choice is presented to our heroes, they must then deal with the repercussions for the remaining human refugees who also have the choice to stay or go. The ensuing chaos just adds to the already complicated dilemma our heroes are facing.

Despite how fast-paced the story is, and considering how many Wildstorm characters are present, we do still get a few really nice character moments. Midnighter and Apollo get a nice moment while discussing whether to stay. Jackson King and Christine Trelane from Stormwatch PHD also get a moment to discuss staying or leaving but their resolution isn’t as nice as Apollo and Midnighter. There’s even a little humor squeezed in as we get a funny moment where they use Maul to inform the refugees The Carrier’s leaving. 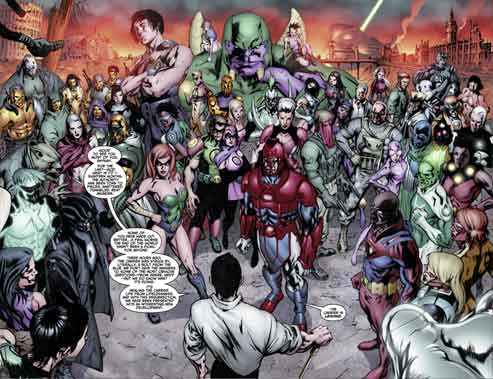 All of this and we get not one, but two great cliffhangers at the end of the issue. If this new creative team can keep up this kind of kinetic energy I hope it’ll generate enough buzz so people will come back and give not just The Authority, but Wildstorm in general a try.