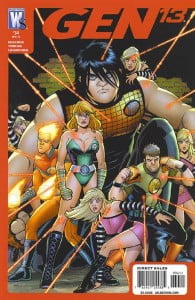 During the past month, the Wildstorm Universe has been thrown into chaos throughout all the World’s End titles. And it has been a great read! The Authority #18 set up the dilemma: The Carrier is leaving Earth. Which heroes are going and which are staying? Wildcats #19 showed the war being waged by the heroes who stayed on Earth against the lost Kheran force known as The Red Blade. This issue acts as an addendum to Wildcats #19 as we see the same battle but from the perspective of Runt from Gen 14. 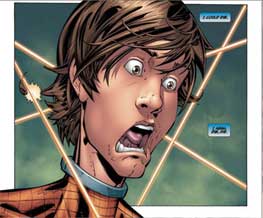 Gen 14, you ask? No, it’s not a typo. If you haven’t been following World’s End then you don’t know about Wildstorm’s newest Gen group. But where Gen 13 were created to serve the purposes of the secret organization Tabula Rasa (introduced in Gail Simone’s run), Gen 14 were created as breeding stock for Gen 13. Early in World’s End, Gen 14 was discovered by the remnants of the U.S. government and used against Gen 13. Thankfully though, the kids realized they were being used, turned against the U.S. military and joined Gen 13 (jokingly referring to themselves as Gen 13.5).

So now that you’re up to speed, back to Runt. He can increase his mass and size pretty much the same way Maul of the Wildcats can. Well, Adam Beechen decided to tell us about this battle from his point of view and it was a great way to tell this story. What’s great about it is that it allows first-time readers to pick up the issue and understand what’s going on by following Runt’s narration. Beechen is currently writing Wildcats (he’s only on Gen 13 for #33 & #34, Phil Hester takes over with #35). So basically Beechen wrote both issues which dealt with this huge battle. So for those following both titles, it was cool to see things crossover between the two. Even though Runt is a clone, he’s only 16 years old. So he’s still young and inexperienced and he’s suddenly thrust into these extraordinary events. But on top of that, he feels that the veteran heroes are ordering him and the other Gen’s around because they are clones and thus are expendable. So basically we’re seeing this battle through the eyes of a teenage who’s scared out of his wits!

This is the most exposure this character has gotten since his first appearance. It was great to get into his head and really feel what he was during this whole ordeal. I think this type of internal monologue is a lost art now-a-days in comics. I think a lot of people consider it old-fashioned but if done right it is a tried and true story-telling technique. And much like Christos Gage did during his Wildcats run, Beechen pulls out a few long-lost Wildstorm characters and throws them into the mix. There were some nice guest appearances in this issue. 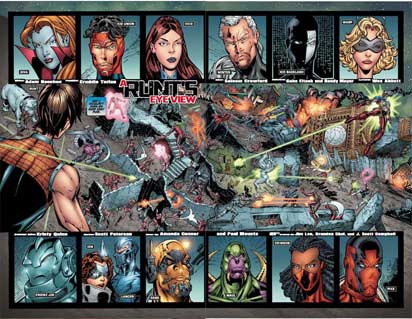 Finally, there’s Cruddie Torian’s art. He’s new to the industry and this is only his second issue. People say that his style is very much like J. Scott Campbell and I think that’s a great compliment. His version of the characters gives them a youthful appearance which is appropriate for the title. I thought his art in the last issue was a little shaky but I saw a vast improvement here. I think he’s going to be a sought-after artist in the future and then people will be talking about how he got his start here on Gen 13.

Overall, this was a huge improvement from the last issue! I liked the story and how it tied in with the events of the other World’s End books without necessarily having to read the others (but why wouldn’t you?). Next issue Phil Hester comes onboard as regular writer and I look forward to his take on Wildstorm’s teen-team.