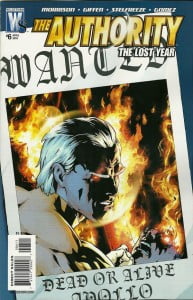 I think this is the strongest issue of The Authority: The Lost Year yet. Last issue was more of a bridge between this arc and the previous. It gave closure to the first arc but set up how The Authority got to where they are now. For a first-time reader, there isn’t much missing info, so I think a person picking up this issue wouldn’t be lost. 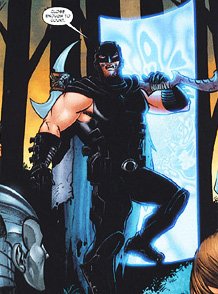 I usually wait until the end of my reviews to talk about the art but this time, I really liked it from page one. I don’t have a way to confirm this, but judging by the way the two men are credited it looks like Brian Stelfreeze (Wednesday Comics, Shadow of the Bat) did the layouts and Joel Gomez (Lost Boys: Reign of Frogs, Iron and the Maiden) did the finishes. And what a strong pairing of artists! The amount of detail created by these two working together is nothing short of staggering.

This issue also has a great start as we get an action-packed introduction to this reality where The Authority has landed. The premise of Lost Year is that The Authority is lost in The Bleed and is jumping from reality to reality trying to get back to the Wildstorm Universe. They are caught up in the events of this Earth so quickly that they don’t even have time to lament the tragedy that befell them at the end of the last issue.

However The Authority is no strangers to dealing with alternate Earths. It’s a plot device that can get a little overused but thankfully, this one is interesting enough to keep the story moving. Honestly though, this is only the second reality they’ve been in since the series began. Returning to the art for a second, it seems that Stelfreeze and Gomez returning to close this arc in next month’s #7. While it is a little jarring to keep having artists change on the book, (we’ve had four in six issues), I can live with it if it only happens when they enter a new reality.

Again, this is by far the strongest issue of this series so far. It seems now-a-days many (not all) comics need at least a good six issue run to get you into the over-arcing story. Lost Year has been a unique case because of the behind the scenes happenings that have affected the book. But thankfully, the middle of the series seems to have finally hit a good stride. Next month’s #7 will let us know for sure.