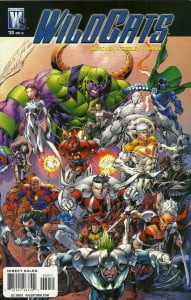 Another incredible issue from the new creative team! This can be considered the “Empire Strikes Back” of this premiere 3-part arc that Adam Beechen and Tim Seeley have constructed. Things do not bode well for our heroes. They just witnessed The Red Blade forces defeat an entire fleet and now they’re returning to finish off our heroes! 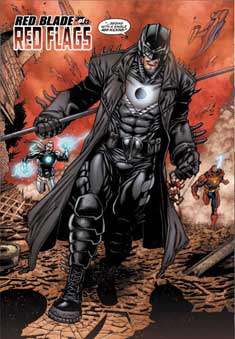 Even though many heroes are present, Beechen wisely keeps the focus down to a few while the others are either in the background or have smaller roles. Fans of The New Dynamix mini-series that came out in 2008 will get a nice surprise in this issue. It is also noteworthy that mid-way through the issue, the events we saw in Gen 13 #34 a couple of weeks ago come into play. This is turning out to be the biggest-little crossover you’ve ever seen. We are following this massive battle between three titles (Wildcats, The Authority, and Gen 13). You can’t beat a crossover that’ll cost you less than $10 to follow each month. Another nice surprise happens during Voodoo and Grunge’s mission. Spartan’s brilliant leadership skills burst to the forefront in this arc. I think it’ll be more relevant to longtime fans of The Authority instead of the Wildcats, but if you’ve read Warren Ellis’ Authority issues, you’ll know what’s going on here.

I also love how Beechen is portraying The Red Blade. These guys are ruthless and the feeling of being in an all-out war is definitely here as we start to see casualties. The end is something I think most people saw coming, BUT, the creative team doesn’t leave us with just that. We get a wicked cliffhanger at the end that was quite shocking!

I’m still loving Tim Seeley’s art. There are a few characters that I think he draws better than others but that’s nit-picking. My two favorite shots were a splash page of Midnighter and a splash page of The New Dynamix character who showed up. The creative team is doing an incredible job so far. I eagerly anticipate how they’re going to end this arc next month.

Oh, and I challenge you to find the reference to the movie, “The Princess Bride”. I thought it was great.

Overall Rating 8 out of 10 (On Its Way to Greatness)