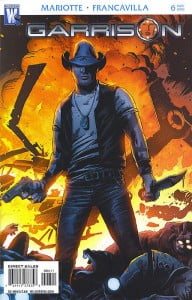 (No Spoilers)
Where Sparta U.S.A. frustrated the heck out of me, in the end Garrison was successful in underwhelming me. I tried to give this book the benefit of the doubt but ultimately it was just your average comic.

Did we get more fun Francesco Francavilla art? Absolutely! Plus we get some great action scenes but that’s something that this series has delivered since the beginning. Continue reading → 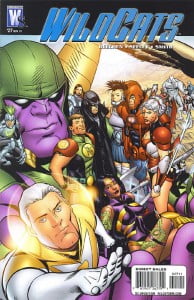 The reveal of who Aeon may seem to most that it came out of left field. But one thing about World’s End is that it definitely has catered to long-time fans. Even after hearing the villain’s true name, it was a little insert a few panels later that solidified for me who it really was. Since we already got to see many of the major Wildstorm villains appear in World’s End I had no idea who this might be. I was a little underwhelmed but I think it’s cool that Beechen took something left over from a past Wildstorm book and decided to use it here. Continue reading → 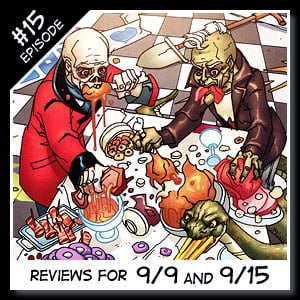 Welcome to another awesome episode of Wildstorm Addiction! Joe David Soliz and Ben Murphy bring you Wildstorm reviews for the weeks of September 9th and 15th 2010. Reviews including Welcome to Tranquility: One Foot in the Grave #3, Dv8: Gods and Monsters #6, Ides of Blood #2, and X-files/30 Days of Night #3.

Spoiler alerts warning for the podcast reviews, but all the written Wildstorm reviews at site are spoiler free unless otherwise noted. Continue reading → 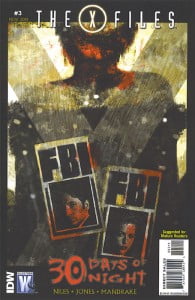 The layouts and the pacing take on more of a widescreen feel in this issue. Mandrake’s art seems to be getting better and I like some of the huge establishing shots he illustrates. Plus, like I’ve mentioned before, we don’t have a particular vampire character we’re following so Mandrake takes the vampires we do see and seems to give us only teases of them. Whether it’s in shadows or close-up shots, he truly gives them a beast-like quality. This is a departure from the way Niles has presented them in the past which was a mixture of the human and animalistic traits. But again, I think it’s the lack of a main vampire character (so far) that drives this notion.
Continue reading →